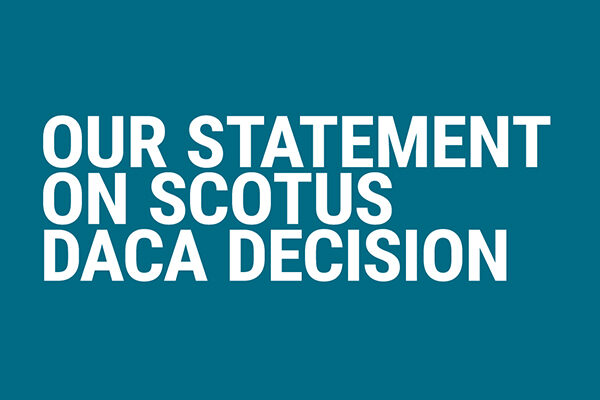 Throughout our nation’s history, there have been momentous occasions when the Supreme Court has propelled us further along the long arc of the moral universe towards justice as Dr. King promised.  Today’s decision by the Supreme Court to block the Trump Administration from ending DACA, following this week’s earlier decision protecting the civil rights of LGBTQ Americans, demonstrates that our nation is a bit further along its path toward justice for all than it was before.

Unfortunately, this decision is not a final repudiation of attempts to end a program that protects the ability of immigrants to legally work and their children to receive protection from deportation. DACA is a humane and respectful step on the journey toward the full inclusion in our society that its recipients and their families deserve. The Supreme Court only ruled the Administration needed to find a better policy explanation to end a program that at its core is protecting the health and well-being of immigrant families and children. However, there simply is no rationale for ending this program.

If this Administration is serious about its stated goal of ending HIV as an epidemic in America, it needs to strengthen and expand programs like DACA, the Ryan White Program, the Affordable Care Act, Medicare and Medicaid and other safety net programs while actively working to eliminate the systemic oppression in the forms of racism, homophobia, transphobia, and sexism that routinely prevent all Americans from fully participating in society.