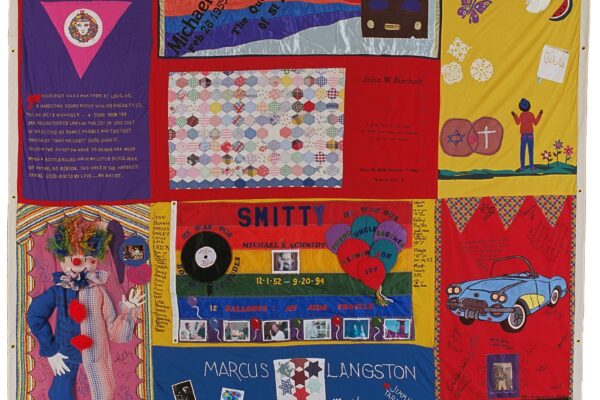 June 23, 2020 – Vivent Health announced today a long-term partnership with the National AIDS Memorial, a nonprofit devoted to the remembrance of people lost to AIDS that works to ensure the legacy and ongoing struggle with AIDS is never forgotten. As the Premier National Community Partner of the AIDS Memorial Quilt, Vivent Health is providing a monetary gift over five years to support AIDS Memorial Quilt programs and educational activities, including displays of the Quilt in communities across the United States.

Under the care and stewardship of the National AIDS Memorial, the Quilt serves as a visual reminder of the AIDS epidemic and continues as the largest ongoing community art project in the world. Today, the Quilt is a powerful social justice teaching tool, weighing more than 54 tons, and having grown to nearly 50,000 3-by 6-foot memorial panels, individually sewn together to tell the personal stories of 105,000 lives lost to AIDS.

Vivent Health and the National AIDS Memorial begin the partnership by announcing that ten sections of the Quilt, consisting of 80 individual panels, will be on display at Vivent Health offices in six cities in Colorado, Missouri, Texas and Wisconsin. The Quilt sections on display have been chosen to include panels that represent each geographic area and will be rotated within Vivent Health’s locations throughout the year, providing an important educational resource for employees and the public about HIV/AIDS.

“Today, the Quilt remains a powerful social justice teaching tool that represents so many lives lost to HIV/AIDS,” said National AIDS Memorial Executive Director John Cunningham.  “With the support from partners like Vivent Health, we are able to ensure that the lives and stories the Quilt represents can be shared in communities across the country, and used to help educate communities in the fight against HIV/AIDS.”

The AIDS Quilt was conceived by long-time San Francisco gay rights activist Cleve Jones, who is also a dear friend and active supporter of Vivent Health. In 1985, while planning an annual candlelight march to honor men like San Francisco Supervisor Harvey Milk and Mayor George Moscone, Jones learned that more than 1,000 San Franciscans had died from AIDS-related complications. Jones asked each of his fellow marchers to write the names of friends and loved ones who had died on placards. At the end of the march, Jones and others stood on ladders taping these placards to the walls of the San Francisco Federal Building. The wall of names looked like a patchwork quilt. It was this seemingly simple act of love and defiance that led to the first panels of the Quilt being created, and sparking a national movement that continues today.

“The enormity of loss and social injustice the Quilt represents is so profound and it visually captures the painful journey of the HIV/AIDS crisis that our country continues to face four decades later,”  said Cleve Jones.  “I am truly moved by the leadership of Vivent Health in supporting the Quilt and helping share the Quilt’s powerful story, particularly in helping reach communities most impacted by HIV/AIDS today.”

Since the first cases of AIDS were reported in 1980, more than 700,000 people have died from AIDS-related complications in the United States. Today, there are more than 1.1 million people currently living with HIV in the United States, and an estimated 1 in 7 people do not know they have HIV. In 2018, nearly 38,000 people received an HIV diagnosis in the United States, with Black/African American gay and bisexual men accounting for the largest number of HIV diagnoses. The partnership between Vivent Health and National AIDS Memorial will collaboratively raise awareness and reach communities and populations adversely impacted by HIV.