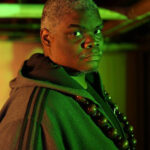 Van Campbell III is a Milwaukee-based filmmaker and designer. His short films have been featured in myriad festivals including Cannes and Milwaukee, garnering numerous prestigious awards. Most notably, Campbell is known for his films ​​Mason Jelly Jar (2013), The Last Day (2015), and​ Blood of Bad Men (2020).

Influenced by the spoken storytelling traditions of people living in southern and midwest regions of the United States, Campbell reinvents the mechanics of classic poetry, using alliteration, prose, and metaphor to achieve structural storytelling. Campbell cites his greatest writing influences as Paul Lawrence Dunbar for social analysis, August Wilson for use of dialogue, Gabriel García Márquez for his use of magical realism, and William Kennedy’s narrative device.

In his most recent spoken-word piece ​“The Human Race,”​ Campbell contrasts three uses of the word, “Race.” The first instance juxtaposes the end of slavery with the start of national African American representation. Despite the manumission and efforts of abolitionists, the clear path to equal representation on cultural and societal levels was painfully lacking.

The next invocation of the word Race defines how the legacy of inequality continued to contaminate progress even after the end of slavery through the African American migration to the north beginning in the 1940s. Healthcare disparities narrowed slightly, but the lack of insurance for many working African Americans combined with the unethical Tuskegee and HeLa cell experiments cemented roots of distrust.

The final use of the word Race construes the definition of equality and punctuates the intent for improvement in modern healthcare. By acknowledging past obstacles and wrongs, we promote more trustworthy practices, where people—no matter their differences—can find safe and viable pathways to betterment. Ground won’t be gained unless we concentrate on our similarities rather than our differences while speaking the truth of our journey. 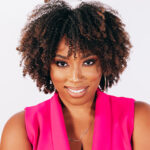 Named one of The Root’s 100 Most Influential African Americans in 2019, Raniyah Copeland is an opinion leader and seasoned advocate leading the charge to end HIV in Black communities.

Copeland has worked her way up through the ranks at Black AIDS Institute (BAI), serving as the institution’s Training and Capacity Building Coordinator, Manager, and Director of Programs, before becoming President and CEO in 2019. She managed all HIV treatment, prevention, and community mobilization training and engagement programs, including the Black Treatment Advocates Network (BTAN), the African American HIV University (AAHU), and the Greater Than AIDS campaign.

Before joining BAI, Copeland worked at Planned Parenthood in Pasadena as a Health Educator, promoting healthy sexual choices and conducting HIV and STI testing and counseling. She also served as Executive Director of the Black Recruitment and Retention Center, managing the joint effort between students and the University of California, Berkeley to increase and retain Black students in the UC System. Copeland co-founded the Afrikan Black Coalition, an organization for Black students in California.

Raniyah studied Public Health and African American Studies at the University of California, Berkeley and earned a master’s in Urban Public Health from Charles Drew University of Medicine and Science in Los Angeles. She lives in South LA with her two young children and husband. 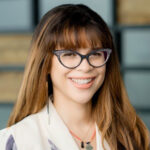 Dr. Jeanette Kowalik has 19 years of progressive public health experience. She began her career as an intern at the City of Milwaukee Health Department in 2002 and returned in 2018 to serve as the Commissioner of Health until fall of 2020.

Jeanette attended Northern Illinois University’s Master of Public Health (MPH) program, attended the Management Academy for Public Health at the University of North Carolina-Chapel Hill and began her doctorate in health sciences at the University of Wisconsin (UW)-Milwaukee shortly thereafter. In her previous roles as UW-Madison’s Director of Prevention and Campus Health Initiatives and Associate Director of Women’s and Infant Health at the Association of Maternal and Child Health Programs, Jeanette focused on social determinants of Health, Health Equity and Anti-Racism work.

The highlights of Dr. Kowalik’s public health career to date are Declaring Racism as a Public Health Crisis in July of 2019 and prioritizing the impact of COVID-19 by race and ethnicity in Milwaukee; this motivated other jurisdictions to do the same. In essence, data sharing enabled the country to see a disturbing pattern of COVID-19 incidence among BIPOC. This increased awareness led to recalibration of outreach strategies and resources to save lives. Dr. Kowalik returned to Washington D.C. in late 2020 to serve as the Director of Policy Development for the Trust for America’s Health, a non-profit, bi-partisan health policy organization. 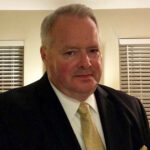 Under Lehman’s direction, the agency has grown to a staff of over 185 with a $62 million-dollar annual budget. PIHC has Centers located in Chamblee, Duluth, Decatur, and Marietta. Lehman has more than 36 years of experience in HIV nonprofits, program design, community engagement, development and evaluation, advocacy, and fundraising.

Lehman attended the John Anderson Graduate School of Management at UCLA, under the Johnson and Johnson/UCLA Health Care Executive Program. Lehman has written numerous articles and editorials on issues related to HIV/AIDS.

Frank E. Thompson, Jr. is one of two Deputy Directors for the Kansas City (MO) Health Department (KCHD), where he has served since 1999. Thompson holds a BA from Amherst College and a MS in Public Health from the University of Massachusetts – Amherst. Prior to being promoted to the Deputy Director position at KCHD, his duties as the Manager of HIV Services included oversight of 10 federal, state and local HIV-related funding streams totaling over $8 million per year.

Thompson’s early projects with KCHD included completion of the city’s first Minority Health Indicators Report (2000) and facilitating KCHD’s participation in a statewide initiative to examine the role and function of public health at the state and local level (2001-2002). During his tenure with KCHD, he has played a lead role in KCHD’s effort to become the first accredited local public health agency in Missouri (2004) and creating the first Community Health Improvement Plan (CHIP) (2004-2006).

Within KCHD, Thompson provided leadership for implementation of the Kansas City Health Commission (2001), and the KCHD Office of Strategic Management (now called the Division of Community Engagement, Policy and Accountability). Frank also serves or has served on the Board of Directors for several local non-profit agencies engaged in providing health services/health education within the Kansas City metropolitan region.